Girl Power! (Or how I realized that I'm still craving strong female representation in superheroes at my age)

Chris and I went to see Captain Marvel in the theater over the weekend.  So....SPOILER ALERT!  I will be talking about parts of the movie.  You've been warned!!

I found myself tearing up at moments, like when Carol Danvers was thinking back to all the times in her life that she was told she couldn't do something, she should give up, or she wasn't good enough.  Then there's a line that she says that made me fully sob out loud:  "I've been fighting with one arm tied behind my back, but what happens when I'm finally set free?" 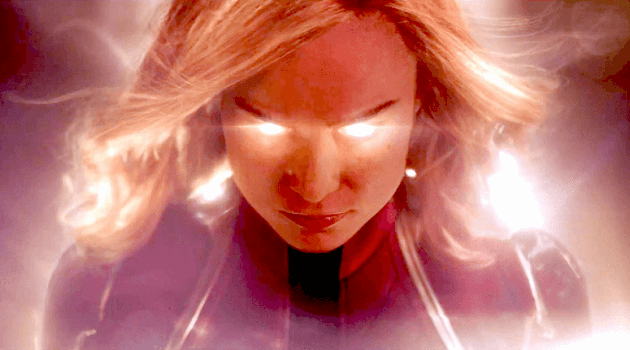 Talk about the lives of women all over the world and throughout time!  This is the moment when Carol realizes in the movie that she's been held back from her full potential by her circumstances and by a lot of people around her (who happened to be male), and that all of that messed with her head.  Once she realizes this and sheds her past baggage, she lets loose and KICKS. ASS.

You hear a lot about people wanting and needing to be represented in the media.  Whether that is defined by gender, sexuality, or culture, it's becoming more important to have diversity in TV and movies so that many different people can identify with characters and stories.  But I'll be honest, I never thought that I needed that.

Wonder Woman really hit that point home for me.  When I was a kid, I LOVED that show when it starred Linda Carter.  But when I saw it in the theater, I started crying in the middle.  When Diana Prince was being strong, being feminine, showing compassion and empathy.  When she was questioning why things were the way they were.  But especially when she was being a leader - as Wonder Woman, she decided not to wait but to lead the charge across No Man's Land in that epic battle scene (well, one of the epic battles scenes - that whole movie was epic to me).

And then again during Captain Marvel - all those flashback scenes of Carol being held down or held back by men from childhood and throughout her life.  It hit me again.  I don't feel as though I've been held back quite like that in my life, because I have the most amazingly supportive father ever and I married a man who has rarely ever said no to me.  But it hit me (again) that our world is built to be systematically punishing to anyone who is not white and male.

I'll be 47 years old this year.  And I guess I'm still starving for strong kick-ass women in movies and TV.  I think there are more in TV than in movies, but there is something to be said for a female SUPERHERO headlining a blockbuster movie.  Or, as Carol Danvers says in the movie, "Heroes. Noble warrior heroes."  We need more Wonder Women.  We need more Captain Marvels.  We need more Black Panthers too.  We need more diversity on the big screen.  Our reality is so diverse that it's crazy that our media world is so homogenous.

And, if anything, the fact that all three of those movies I just referenced had ginormous opening box office weekends supports the desire for more representation.
Posted by Priya Kumar Bradfield at 8:43 PM

Girl Power! (Or how I realized that I'm still craving strong female representation in superheroes at my age)

Chris and I went to see Captain Marvel in the theater over the weekend.  So....SPOILER ALERT!  I will be talking about parts of the movie.  ...